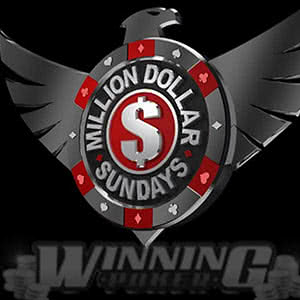 The next Million Dollar Sunday – due to be played on October 15 2017 – could overlay substantially and represent exception value to players who cash in the event.

Sites on the Winning Poker Network are ten days into their relaunched OSS Cub3d series, and it is not going so well. Whereas previous series have seen guarantee-busting prize pools, the first week of the current series saw more than half the events fail to attract sufficient entries to reach their guarantees, and all bar a few beat their guarantees by more than 10%.

By the successful standards of the Winning Poker Network, the response to a second OSS Cubed series in a relatively short space of time is disappointing. Possibly of more concern to the Network is the potential overlays still to come – notably the half-price buy-in Million Dollar Sunday scheduled for October 15, the first of three Million Dollar Sundays scheduled within eight days of each other.

Why is OSS Cub3d Not Going so Well?

To clarify, OSS Cub3d is not going as well as anticipated, rather than not going well at all. There have been some success stories – for example, last Sunday´s “Sunday Special” smashed its $150,000 guarantee by more than 20%, and did the $10 buy-in Turbo Mega-Stack event that started an hour later. However, it is unusual for so many events to be undersubscribed.

Possibly the cause of this is the Network´s ambitious schedule and the guarantees attached to them. The OSS Cub3d schedule has been packed out with tournaments that would normally form part of the Network´s regular schedule, with many of them having enhanced guarantees to meet the $14 million series guarantee. Another explanation could be tournament fatigue – the OSS Cub3d series coming immediately after PokerStars´ WCOOP, Party Poker´s PowerFest and 888 Poker´s XL Eclipse series.

Whatever the reason, something needs to change before the Million Dollar Sunday event scheduled for October 15 gets underway. When it was announced the previously disrupted series would be played again, it was promised the buy-in would be half-price ($265.00 instead of $530.00). In order to reach its guarantee, the Winning Poker Nework have to attract a 1,000 more entries than its current record (2,744). Despite the half-price buy-in, that scenario looks unlikely at the moment.

How to Satellite into the Million Dollar Sunday

Despite the half-price buy-in, $265.00 is still a lot for most players to invest in a poker tournament; so the Network is supporting the event with a comprehensive satellite schedule. The most popular of these are the three times daily re-buy and add-on satellites with a buy-in of just $4.40. These triple turbo satellites guarantee one seat to the next Million Dollar Sunday event, so promise a potentially excellent ROI for the winner. Other daily $22.00 buy-in satellites guarantee two seats for the target event.

Starting next Tuesday (October 10), the Network will start its program of Mega-Satellites. On Tuesday, Wednesday and Thursday, these will start at 8:45pm (all times ET) and each $22.00 buy-in Mega-Satellite guarantees ten seats into the Million Dollar Sunday. On Friday at 7:30pm, the buy-in increases to $33.00 and the guarantee to fifty seats, and on Saturday at 7:30pm the guarantee increases to one hundred seats. Prior to the target event on Sunday October 15 at 11:30am, a special $44.00 buy-in Mega-Satellite will guarantee one hundred and fifty seats

Each of the final free Mega-Satellites each have their own sub-satellite qualification path. These start at Freebuy level – games that are free to enter and during which players have the opportunity to increasing their chances of qualifying by purchasing add-ons and a re-buy. Naturally, these sub-satellites are incredibly popular as each Freebuy sub-satellite guarantees a minimum of three seats to its respective Mega-Satellite. Players competing in the Freebuy events are advised to check which Mega-Satellite they are aiming at, as each is for a specific tournament into which you will be entered automatically.

Will You Benefit from a Million Dollar Sunday Overlay?

We estimate that, unless something changes before October 15, the Million Dollar Sunday will overlay by around 25%. That means the winner of the event – who is guaranteed $200,000 – will be picking up around $50,000 more than he or she would if there was no guarantee. The overlays continue throughout the payout structure, with players at the bottom of the payscale (probably around 400 places) collecting $125.00 more than they would normally.

If you would like to benefit from a potentially substantial overlay, and you are not yet playing at a site on the Winning Poker network, we recommend Black Chip Poker. Players creating an account before this coming weekend will be eligible to play in four $250 New Deposit Freerolls, get a first deposit 100% bonus up to $1,000, and enjoy twenty days of “free poker”. Check out our page about the Black Chip Poker bonus code with further details of the site´s Welcome Package and how to apply the code when creating your account in order to be eligible for the full package.